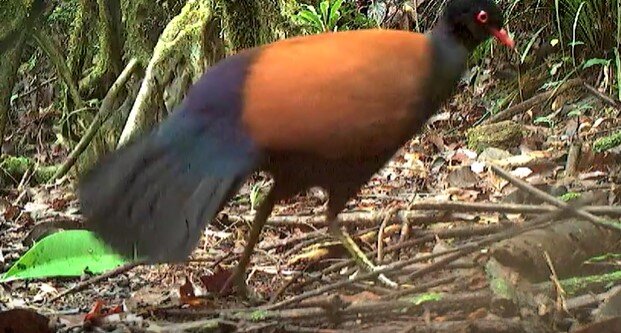 The black-necked pheasant pigeon was last seen back in 1882, and since then scientists have not known if this beautiful bird still lives in the forests of Fergusson Island.

Now, finally, they were lucky: one of the cameras captured a representative of the rarest subspecies of pheasant pigeons.

There are not so many «white spots» of biodiversity left on our planet, poorly or not at all explored. And yet, every year, new species of animals and plants are described, sometimes not at all small ones.

So, for example, at the end of the summer of this year, the world learned about the beautiful rainbow fish, and at the beginning of autumn — about a new species of sloths.

One of the main «suppliers» of new species of flora and fauna is tropical forests, with their highest biodiversity.

Unfortunately, the ongoing deforestation threatens the extinction of both species that have not yet been described, as well as those whose existence is reminded only of centuries-old records that have not been confirmed by a single photo or video.

The black-necked pheasant pigeon (Otidiphaps nobilis insularis), the rarest subspecies of pheasant pigeons that lives only on Fergusson Island, has been one of such elusive animals for 140 years.

Over many years of observation from Cornell University (USA), concentrations of traps have been revealed, and only in September of this year, two days before the end of the next expedition, they managed to do this.

According to the information portal Phys.org, fame is added to the joy of scientists: the owner of the forest plot in which a live pigeon was found is already approaching a resource for a logging company, and in the near future the refuge of a rare bird may be infected.

Now the team is looking for funding to return to Fergusson and assess how many pigeons are left on the island.